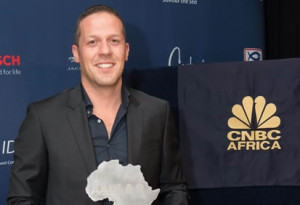 Roman’s Pizza CEO John Nicolakakis was announced as a finalist in both the Young Business Leader Award and Young Entrepreneur Award categories, and was recently announced as the joint winner of the Young Business Leader Award, shared with Ashley Uys of Medical Diagnostics. The AABLA Awards were created to honour remarkable leadership and salute those who have contributed to and shaped the African economy.

Roman’s Pizza has grown considerably under the leadership of CEO John Nicolakakis, whose commitment to the brand have been recognised by his nominations in the All Africa Business Leader Awards (AABLA) in 2015. In order to be considered for the awards, individuals must demonstrate that they are dynamic and successful leaders, capable of ingenuity and innovation and continuously striving for excellence.

Bringing together his extensive experience in the fast food industry and his background in finance, Nicolakakis has steered the Roman’s Pizza brand through the transition from a small family business to a medium-sized corporation while remaining dedicated to what the brand has always been proud of: high-quality food and good value for money, hence the Roman’s Pizza motto: “Best Pizza. Best Value.”